As many of you will know Unite, along with other education unions, has been challenging yet another clearly inadequate “final” pay offer. The 3% offer made in May completely ignores the huge surge in the cost of living, and fails to recognise the incredibly significant contribution made by staff who have kept institutions running over the past two years. As usual UCEA painted the weighting of 9% for those on low pay bands as generous when, after allowing for the increase in the national minimum wage which all employers have to implement, this means the UCEA offer is only worth an additional 3% to the relevant staff. Do not let the employers pull the wool over your eyes.

Having considered the final offer, Unite’s Education National Industrial Sector Committee (NISC) decided on 5 July 2022 to declare a collective dispute. An Action Plan, developed by the Higher Education Action Committee, has been approved. Your branch will be invited to consult on this plan following a further NISC meeting on 15 July which follows a second dispute meeting with the employers. Please keep an eye out for communications from the Unite Education National Officer, Andy Murray.

Sister unions in higher education, UCU, EIS, and UNISON, have also registered a dispute over pay.

What are the next steps?

It has long been clear that the higher education sector employers prefer a status quo of acceptance of low pay and inaction from their employees. They have been happy to take advantage of staff goodwill by deliberately anchoring pay to harshly suppressed increases in the public sector, whilst at other times claiming that higher education is private sector, protesting loudly about its independence from government.

It is time that our employers showed us some of that goodwill and offered us a pay rise in line with inflation.

It is time for us all to act! 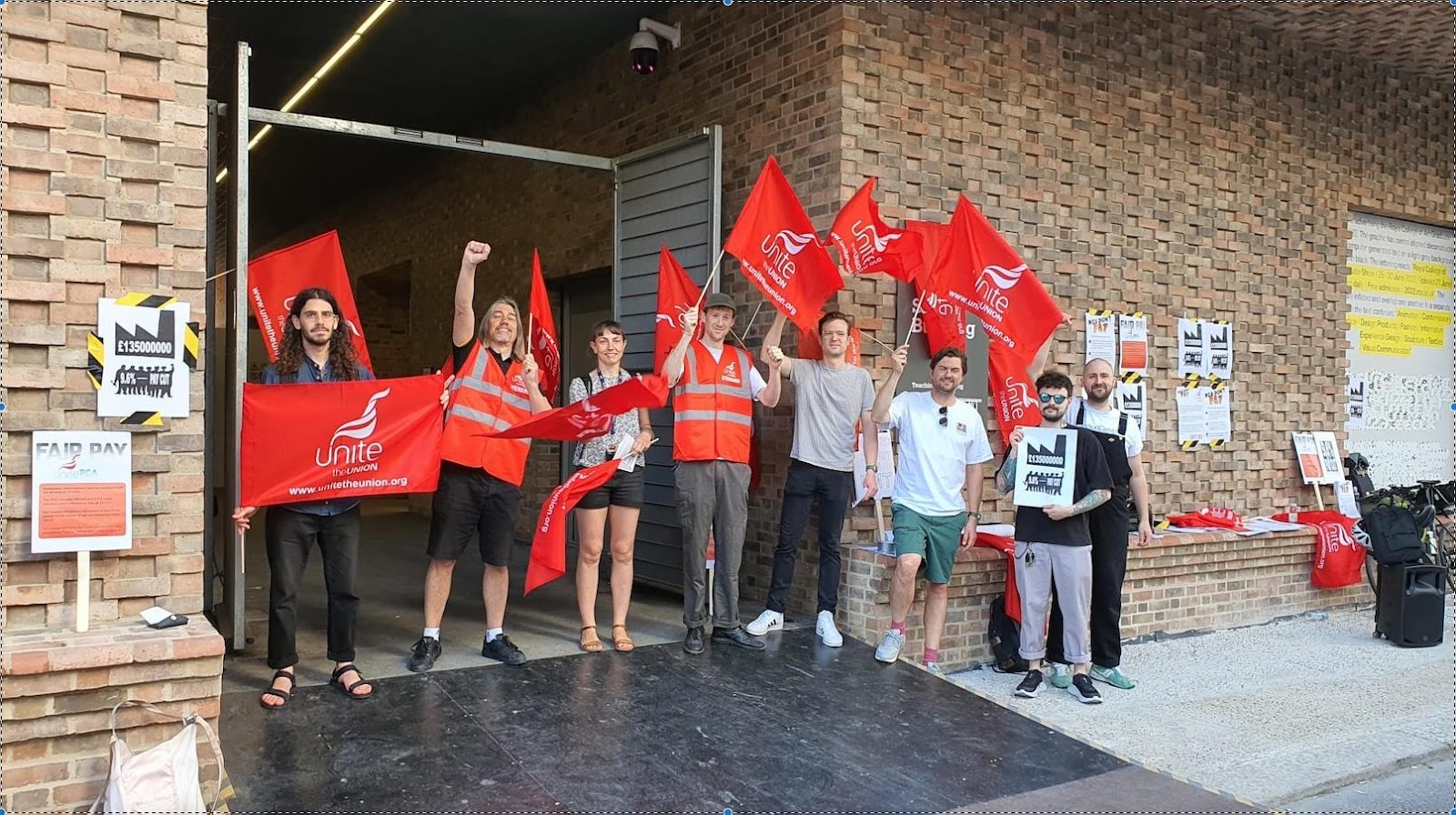 This spring five branches in London took part in disaggregated ballots on taking industrial action against the imposed 2021-22 national pay increase. One of those five, the Royal College of Art (RCA), has now taken action as a result of a 90% positive vote of branch members. The branch considers this to be just the start of challenging the continued decline in the value of pay.

On Wednesday 22 June, RCA Branch pickets gathered at both the Battersea and Kensington Gore campuses with banners, flags and placards for a highly visible protest at the college’s lack of any response to the rising cost of living for staff. The contrast between spending on staff pay (for those on the 51 point pay spine) and the huge amount spent on the new Battersea Campus (£135 million) was obvious. Just like other HE institutions, new buildings and expensive furniture seem to be the preferred focus for management fund raising, rather than the staff that actually provide the teaching, technical support, admin and other services that make the experience of being a student worthwhile.

The college’s tardy but interested response to the preparations, and strike itself, means the branch is even more determined that meaningful negotiations should begin asap on options to improve pay. It is clear that without the strike this would not be happening. 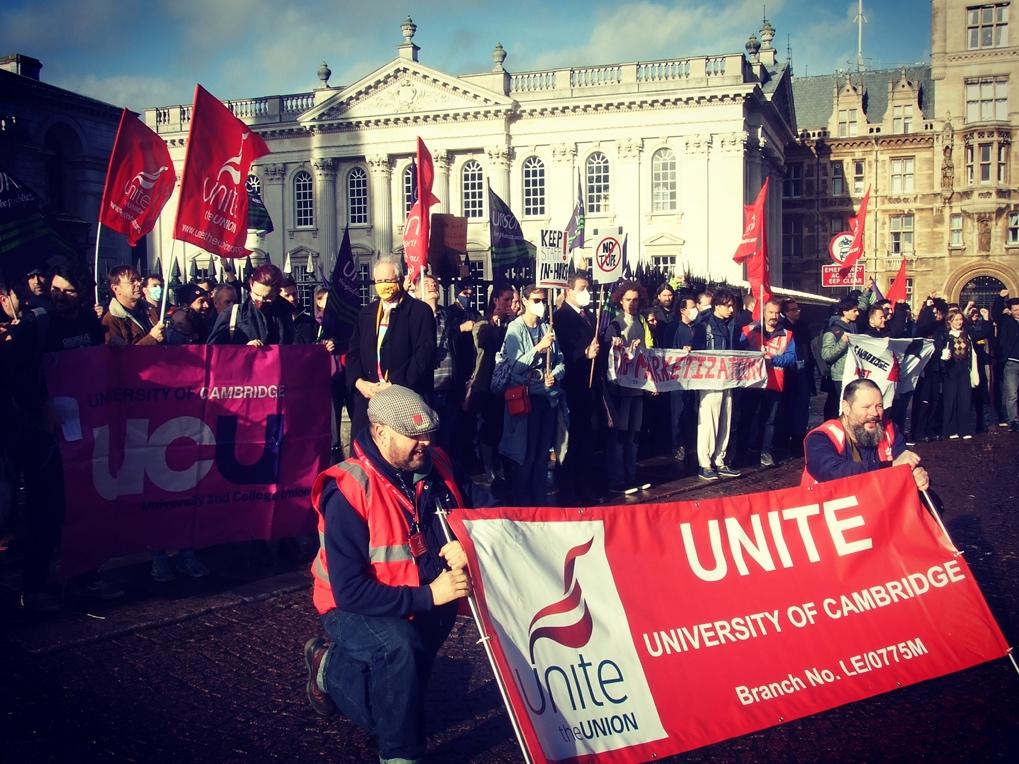 A truce in the dispute over the outsourcing of the estates staff has been reached due to sustained opposition and detailed negotiating by Cambridge branch. No more industrial action is planned at the moment. Over the course of many meetings the branch maintained the need to protect existing directly employed staff. They also required formal acknowledgement by the University of the commitment and invaluable contribution of this under-appreciated, and low profile, group of staff.

The negotiated wins are many, useful and various: contact Cambridge Branch for more on these. They include a commitment to the development and continued employment of staff in the Estates Division, Maintenance and Statutory Compliance teams. There will be a dedicated training budget with the unions having a direct say in how that is spent, with backfilling of university roles on a permanent basis, and secondment to an external provider rather than a TUPE transfer. Protections, caveats and annual reviews about service delivery with trade union representation are built-in key outcomes of the negotiations, as well as a “terminate at will” clause and a change control mechanism in the contract with the external provider. All of these will help ensure outsourcing is no longer the automatic “Go to” for management, that seem reluctant to be held accountable for the running of the physical estate, rather preferring to be seen as ‘light touch’ developers of expensive buildings.

Human Rights Act that protects us all is under serious threat

Despite advice, reviews and reports continuing to support the Human Rights Act (incorporating the European convention on human rights), this finger-wagging government seems to believe that it can shore up support by rolling back these rights from those it wants to target. That means, potentially, anyone at all that wants and needs to challenge those in positions of power such as the government. The potential loss of rights will include the ability of individuals to hold institutions to account through the courts, if necessary, right up to the European Court of Human Rights. At the heart of being in a trade union is the vital idea of equality, but these so called ‘reforms’ could well begin to erode and undermine hard-won working rights and entitlements. The government’s clear reluctance to protect workers is already clear despite shouty press releases about, say, what has happened at P&O or the injustice of ‘fire and rehire’ – that the government refuses to ban. You can add your voice to prevent this next step in the government’s plans to suppress any potential protest or challenges to their and other institutions’ power by signing this petition. For more information about the threat link to Liberty’s website.